A Short Essay on Grace Metalious: Beyond Peyton Place

Some years ago, I was asked to put together a book proposal on the deaths of famous writers.  While the book didn’t go through, I was happy with some of the essays I wrote for it.  My essay on Dorothy Parker, for example, found here, is one of those.

In addition to Hemingway, Poe and Fitzgerald, and many others, I also included Grace Metalious in the table of contents.  I have always been fascinated by her, her upbringing, her life in New England, her sudden burst of stardom and, just as suddenly, her decline and death.

With my purchase today of Grace Metalious’ novel, No Adam in Eden, I am now the proud owner of all four of her published novels.  She isn’t a big name anymore, mostly forgotten except when brought up on the occasional moment.  Sandra Bullock was developing a film biography, but that seems to have stalled, as so many film projects do.

Grace Metalious always knew she would become a writer.  Her husband, a teacher, supported her and she basically gave up doing anything else and spent all her time writing.  She had loved everything about the writing life, read other writers, and aspired to be with them.  With the help of her best friend, Grace finished her first novel and sent it off to publishers in New York.

As luck would have it, she was introduced to an agent who supposedly represented Somerset Maugham (although Maugham had fired him for stealing royalties).  He was instrumental in getting the book to Leona Nevler, an editor at Fawcett, who knew they wouldn’t publish it, but thought it had potential.  She passed it on to the publisher at Julian Messner,a small New York house, who accepted it.

The book was Peyton Place.  Published in 1956, it was, for a very long time, one of the biggest best-sellers of all-time.  It stayed on the New York Times‘ Bestseller List for over a year and has sold over 40 million copies.

One of the biggest best-selling books of all-time.

To say it took the country by storm would be an understatement.  With its setting in a small, quaint New England town (an amalgamation of the towns surrounding where Grace lived); its characters devious, backstabbing and sexual;  hidden secrets at every twist and turn, including rape, incest, murder and betrayal;  Peyton Place was the book everyone pretended not to be reading.  Adults hid it from each other and kids hid it from their parents.  I know, I was one of those kids who read it late at night (probably in 1964 when it was reissued for the TV series debut), under the covers, with a flashlight.

The book was turned into a hit movie and a sequel was planned, Return to Peyton Place, published in 1959.  By that time, Grace had become an alcoholic with the money coming in steadily.  Her writing suffered and Return to Peyton Place, rushed to cash in on Peyton Place‘s popularity, was rewritten and polished by a ghost writer hired by the publisher.  Grace wasn’t happy about this, but had little recourse.  She had lost her enthusiasm over Peyton Place, since that was the only thing anyone ever wanted to talk to her about.  She felt she wasn’t taken seriously as a writer, and she was right.

Poster for the hit movie.

She got back to work and released her third novel, The Tight White Collar, in 1961.  Another New England setting and more hidden secrets by its citizens made this one sell initially, but it quickly fell off the charts and sent Grace into another spiral.  This was Grace’s favorite novel, but, along with Return to Peyton Place, the reviews weren’t good. 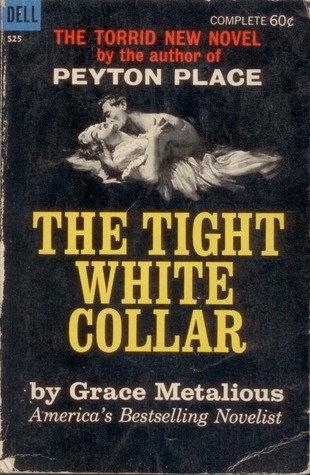 Grace’s desire to be considered a real writer continued as she worked on her fourth, and last, novel, No Adam in Eden.  Published in the fall of 1963, the book is a look at three generations of sexually liberated women, who do anything to get what they want.  It was written more intensely than any of her other books.  With the freedom of being so explicit, the characters seem more fully realized. 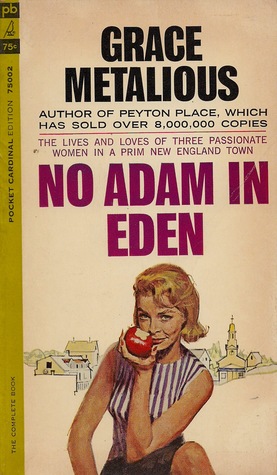 Grace had turned out a very good book, but the reviews were disastrous (one reviewer said, “It purports to be a study of evil but is no more than degenerate filth.”) and this time she didn’t recover.

Grace died in February 1964, at age 36, from cirrhosis of the liver.  Her estate was initially left to her lover of three months, but he decided to not fight a lawsuit brought by Grace’s children contesting the will.  It didn’t matter much.  Grace owed more than she had, including $40,000 to the IRS.  (Later, the IRS sold all of Grace’s possessions, including the original manuscripts for Peyton Place and The Tight White Collar, for just over $5000.)

Peyton Place became a television series that fall of 1964, running for five years.  Neither Grace nor her estate ever saw any money from it.  The series introduced Ryan O’Neal, Mia Farrow and Barbara Parkins and starred Dorothy Malone.

Title card for the TV series.

Today, Grace Metalious’ work is studied in universities and she is heralded as a pioneering woman novelist of the 20th Century, paving the way (for better or for worse) Jacqueline Susann and Jackie Collins, and influencing many other writers.  Some believe that Grace planted the seed of feminism into the minds of girls who were teenagers when Peyton Place was published.

I recommend the book, Inside Peyton Place by Emily Toth.

There is also a Facebook page devoted to Grace:  https://www.facebook.com/pages/Grace-Metalious-PEYTON-PLACE/59394335817

And here was a surprise:  A Grace Metalious bobblehead, sold by the New Hampshire Historical Society.