Ernest Hemingway: A Short Overview with No Insights into His Writing, Life or Otherwise

A while back, I presented a book proposal on the deaths of famous writers.  An editor suggested it for me and I sketched out some rough outlines of Poe, Hemingway and Dorothy Parker (Mrs. Parker’s entry is here on the blog, and I’m sure the Poe entry will show up sooner or later.  Since I’m terribly late in posting my latest story, I’m filling in with this chestnut, complete now with visuals.  I hope you enjoy it. — Hat

Ernest Hemingway:  A Short Overview with No Insights into His Writing, Life or Otherwise

On the morning of July 2, 1961, Ernest Hemingway, quite possibly the finest writer America has ever produced, selected a shotgun he had bought from Abercrombie & Fitch from his gun cabinet, fired once, and blew his head off.  He was just two weeks shy of his 62nd birthday.

At the time of his suicide, Hemingway was just a shell of his former self, both physically and mentally.  He had suffered severe injuries, including a skull fracture, internal organs ruptured and spinal damage during a plane crash on safari in Uganda in 1954.  More recently, Hemingway had undergone a series of electroshock treatments at the Mayo Clinic to help him with his bouts of depression and suicidal tendencies.  The treatments, subsequently, erased his memories and Hemingway lost his ability to write.  He became even more paranoid and depressed and drank up to a quart of liquor a day, which affected his mood.

It’s hard to measure the impact Hemingway has had on American literature. There have been many imitators, but few could match his prowess.  His prose was distinctively his own voice, simple and direct, with a journalist’s eye for capturing detail.  His heroes are all masculine, a “man’s man” and the public relished reading about activities that they could only dream about — bullfighting in Spain, African safaris, wild nights of drinking. 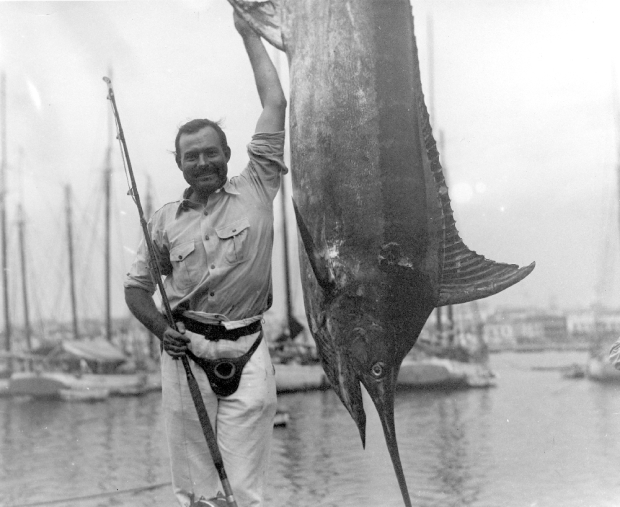 He was lauded as the finest writer of the 20th Century for his novels, The Sun Also Rises (which influenced a generation of “Beat” writers), A Farewell to Arms, For Whom the Bell Tolls and The Old Man and the Sea (which won the Pulitzer Prize in 1953).  Hemingway won the Nobel Prize for Literature in 1954.

Orson Welles remembered:  “I saw Hemingway after he got the Nobel Prize, which Ordoñez, the bullfighter, used to call “the Swedish prize.” I don’t know why that always struck me as a funny name for it. Well, when Ernest got the Swedish Prize—not in his official speech, but to the press when he arrived—he said, “You shouldn’t have given it to me—you should have given it to Isak Dinesen.”  There he was in Scandinavia, so it was very nice for her. I didn’t know how nice until I mentioned it to him one day in Paris. He flew into a rage. It seems he hated her. The old Baron Blixen—her husband—was Hemingway’s great pal out of Africa, and (Dinesen) had left him for another man. Finch Hatton, wasn’t it? The white hunter.” 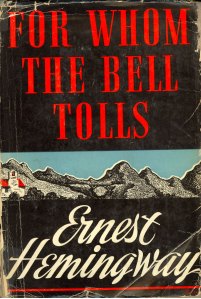 (These are First Edition Covers.  I will gladly take any off your hands.)

Leaving Cuba during Castro’s military coup, Hemingway and his fourth wife, Mary, made their home in Ketchum, Idaho.  In the immediate aftermath of Hemingway’s suicide, Mary claimed the gun accidentally discharged and said Hemingway had left no note.  President Kennedy called Hemingway one of America’s greatest authors and “one of the great citizens of the world.”  Hemingway is buried in the Ketchum Cemetery in Ketchum, Idaho.

His father, a brother and a sister, and his granddaughter, the model and celebrity Margaux, all committed suicide.

Hemingway’s youngest son, Gregory, died a transsexual by the name of Gloria in a cell at a women’s jail in 2001.